"Domingo Martinez is an essential new American voice, and My Heart Is a Drunken Compassdelivers on the promise of The Boy Kings of Texas. In a life of chaos and pain he manages to find grace, and humor, and - contrary to the title of this book - real moral purpose.
This is a riveting book."
- Dave Eggers

"To be an aspiring writer from a poor Mexican American family of heavy drinkers on the border might read tragic if it weren't so hilarious in Martinez's My Heart is a Drunken Compass. Might seem easier when he moves to the Northwest and tries to make like one of the civilized. Glazed, troubled, often lost, Martinez's too hot, drunken heart is still awful funny in cool Seattle."
- Dagoberto Gilb, author of
Before the End, After the Beginning and Woodcuts of Women

From Domingo Martinez, the National Book Award finalist
and the New York Times best-selling author
of The Boy Kings of Texas, comes a bittersweet narrative
of love, grief, and family. 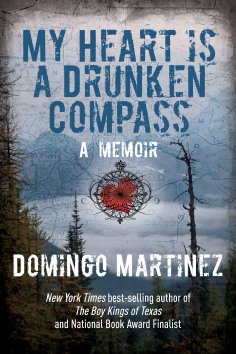 With his trademark tragic-comical voice and arresting storytelling, Domingo Martinez once again delivers a deeply personal memoir full of wry asides and poignant, thoughtful reflections in MY HEART IS A DRUNKEN COMPASS: A Memoir (Lyons Press, November 2014; 978-1-4930-0140-8, $26.95 hardcover), an illuminating new memoir of loss, grief, resilience, and recovery in which Martinez brilliantly examines the complicated connections between family, friends, and loved ones.

The author of The Boy Kings of Texas (2012) returns with another deeply personal and moving memoir. It begins with two late-night phone calls, several years apart. In one, in March 2007, he learns that his brother has sustained a head injury after a fall; the other, in December 2009, tells him that his ex-fiancée has driven her car over the side of an overpass. In writing about this traumatic period in his life, Martinez talks candidly and painfully about his own mental collapse, his alcoholism and drug use, and his slow path to recovery. It's not what you might call an entertaining memoir - if anything it's almost operatically tragic - but Martinez writes so frankly, so eloquently, that we are compelled to keep reading, if for no other reason than to see if this poor guy finds a way to come out the other side of all he's gone through. He does, but it is a hard-won breakthrough. (Booklist)

My Heart is a Drunken Compass is a tragic comedy filled with wit and cultural insight. [Martinez] can be hilarious and insightful, especially about moments when cultures merge or collide. Martinez's voice, which seems like a cross between a border outlaw and an Ivy League scholar, is so self-assured it's difficult not to get pulled into the story. Even when he hits rock bottom, he never loses his sense of humor, and his tenacity to survive is inspiring. If his raw will and Texas grit can't save him, his writing just might. (The New York Times Magazine)

Confronting his whitewashed American aspirations, Martinez narrates his borderland boyhood and Seattle misadventures - and reclaims South Texas from afar - through a stellar soundtrack. In this latest offering, he once more combines deft literary skill with a cultivated ear, this time producing a grunge-era narrative for the 21st century: ironic, confessional, caffeinated. (Los Angeles Review of Books)

Martinez holds nothing back as he interweaves his own downward spiral with tales of his Mexican-American family, his interactions with his social circle, his work and his fraught bond with Steph. . . . Page after page, the captivating Martinez releases a flood of raw emotions in this tender and illuminating memoir. (Shelf Awareness)

This tragicomic memoir is not just about the complications of family, but also about the power of narrative to heal and make whole. A passionate . . . account of personal redemption. (Kirkus Reviews)

The follow-up to his first book, the Nation Book Award Finalist The Boy Kings of Texas, this work finds Martinez again mining his personal and family life for narrative gold. This time, instead of focusing on his border childhood he turns his attention to his adult life in Seattle, most notably his younger brother Derek?s near fatal drunken fall and his ex-fiancé?s harrowing car accident that act as catalysts for an exploration of his own personal traumas?including his alcoholic tendencies and near-suicidal depression. Though Martinez's mischievous nature can still illicit a smile, the self-deprecating humor of the first book has mostly been replaced with self-loathing as the author continually realizes he is unable to help his loved ones because he more often than not refuses to help himself. However, the fact that he knows his issues and is able talk about them in such intricate prose ('My heart was a drunken compass even then, before I was a drunk.') allows this work to remain compelling despite the author's inability to change. As Martinez rides a roller coaster of relapse and redemption, those who survive Martinez's self-inflicted wounds and hang on till the end are rewarded with a conclusion that's unlikely as it is uplifting. (Publishers Weekly)

My Heart is a Drunken Compass is as chatty, funny, philosophical, touching and brutally honest as Domingo Martinez's first memoir, The Boy Kings of Texas. (Seattle Times)

Though his eager readers will no doubt be curious as to what sustains a man who has lived on box wine, Xanax and pizza, the greater curiosity is what Martinez, who has produced two memoirs that unspool the tropes of identity writing in a form that often resembles a fine travelogue, will, with his ferocious wit and fearless self-examination, mine for us next. (The Dallas Morning News)

At heart a cautionary tale about the destruction that alcoholism, addiction and mental illness can inflict on a family, it's a tough read - and would be harrowing, even - if it weren't so hilarious. (Houston Chronicle)

BY THE SAME AUTHOR 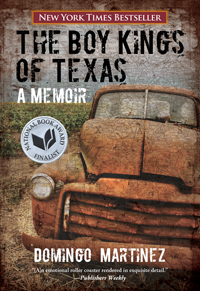 Praise for THE BOY KINGS OF TEXAS, by Domingo Martinez

“Recounting the author’s tough upbringing in Brownsville, Texas, this finalist for the National Book Award joins a rich body of Mexican American coming-of-age narratives.”
—The Washington Post
Best of 2012: 50 Notable Works of Nonfiction

“A hilarious and heartbreaking story of a sensitive soul who grows up in the macho barrio of Brownsville, Texas.”
—Seattle Times

“With The Boy Kings of Texas, a new and important truth about those Rio Grande Valley border towns like Brownsville and McAllen has finally emerged, one that takes into account the brainy boys of the barrio who read Cyrano de Bergerac between waiting tables at the Olive Garden, and play hooky at the Holiday Inn in order to discuss foreign films. Sure, there have always been stories about smart kids who want to leave town or risk going nowhere in life. In the Valley, where there is also a high chance of succumbing to border violence, Martinez unveils the lives of smart kids who feel they need to leave town or else simply die of boredom.”
—Dallas Morning News

“Martinez’s story is heartrending and uncomfortable, but he maintains a surprising sense of humor that keeps his reader cringing and rooting for him. A starkly honest memoir of growing up on the Texas-Mexican border in the 1970s and ‘80s, with a wry twist.” —Shelf Awareness

For Boy Kings of Texas:

For My Heart is A Drunken Compass:

Listen to "The Mimis" and other stories on This American Life

Finalist for the National Book Award!!!